A View From Another Country: Hammerfall (Review & Pictures By Konstantina Frasia)

So our first review from a European writer is here, just before Xmas our lady in the Hellenic heartland witnessed the return of Swedish Power Metal Gods Hammerfall, after an 18 year absence, in a packed Fuzz Club. Here is her view from the back of the room:

Italian folk metallers were brought along as the support for Hammerfall and they proceeded to warm the crowd up by bursting on to the stage with their power/folk mix working well, the band were energetic with the front five members all trading places as the raced through their set with enthusiasm, frontman Damnagoras was the preening frontman controlling the crowd, interacting, goading and prompting them when needed. He even took the time for a selfie with the crowd at the set's climax. The rest of the band were equally fun to watch as they played their instruments for their lives. Damnagoras' voice is nothing special (As I've noted before - Ed) but it fits the bands style, all of the players were tight the two guitars and violin duelled throughout as the rhythm section blasted out from the rear of stage. With their distinct, style the band are a visual force, due to the face paint and 'folk' styling but much of this was nulled by the cigarette smoke in their air and their unusual lighting rendering much of their set in darkness. A good set that did it's job but with a few things that could have improved the set, still the band seemed happy to be there thanking the fans after the gig outside the venue. 7/10

After a change over the noise and anticipation in the venue rose as the band burst on to stage the applause was rapturous and as the fist chord of Hector's Hymn hit horns were thrown, voices were raised and every line was sung back, after the new boy was another recent on with Any Means Necessary which is one of the heaviest songs the band have produced with it's choir-like chant. Oscar Dronjak and Pontus Norgren led the charge with the twin guitars weaving between riffs and solos, while bassist Fredrik Larsson and touring drummer David Wallin kept everything locked in tight allowing the guitarists to express themselves and finally let singer Joacim Cans unleash that amazing voice of his, he soared through classics like Blood Bound, Heeding The Call and the still awesome Let The Hammer Fall, which still has it's great call-and-response chorus. As the gig progressed one thing became clear, Joacim was having problems with his earpiece, he kept touching it and adjusting it, this might be because Athens was the last show of the tour so things were starting to stop working, what was also clear was that Oscar is the sweatiest man in metal having three T-Shirt changes in the space of the set. Cans is ever the frontman cracking jokes and telling stories about the band and their history with Athens before beating us down with more top drawer power metal madness.

Live Life Loud is a call to arms that moved into a medley of songs showing their other tracks. The tour was in promotion of their most recent album and as such sacrifices had to made in the set with Dragon Lies Bleeding being the most obvious still with the progressive Threshold, the powerful Last Man Standing and the old favorite Glory To The Brave rounding out the main set with Hammerfall (plus a Warlord cover that was a little unnecessary) The set was pretty great for any fan of the band or indeed new covert to the true metal cause. Sensing the end was near the band came off stage only to return with a three song encore, the evergreen Templars Of Steel kicked things off with Oscar now shirtless playing the riff with intensity but more importantly a sense of fun that never left the show, newbie Bushido came next and was a brave move taking the place of a more recognizable song but it fits well, a future classic there, however the biggest cheer was reserved for the finale of Hearts On Fire which had everyone singing along until they lost their voices. With that it was done but Hammerfall were triumphant with this set making everyone in the place wish that it won't be another 18 years until they play Greece again!! 9/10

Find more of her work here: http://konaf13.wix.com/konasartwork and on Facebook at https://www.facebook.com/FrasiaKPhotography 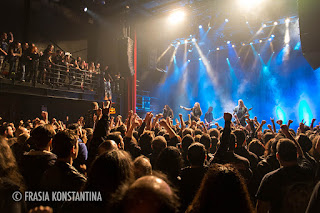 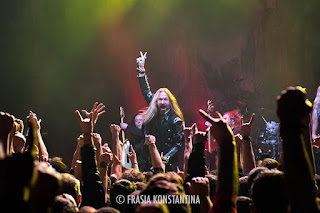 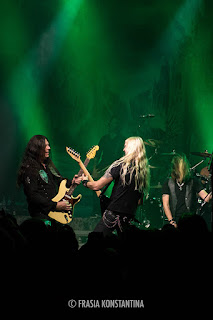 MBlade
Cardiff, South Wales, United Kingdom
The musings of a music lover who wanted to do something with his passion.